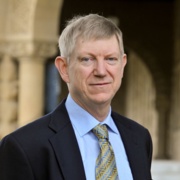 We are pleased to have Prof. Iain Johnstone, Marjorie Mhoon Fair Professor in Quantitative Science, Department of Statistics at Stanford University as the Hannan Scholar for 2017-18.

Iain Johnstone got his PhD in statistics from Cornell University in 1981. He currently holds joint appointments at Stanford University in the Statistics Department and in the School of Medicine  in Health, Research and Policy. His work in mathematical statistics, particularly wavelet shrinkage and random matrix theory, has had a big impact on the field of statistics.

He is a recipient of the COPSS Award, which is the highest honor for a statistician under 40.He was a Guggenheim Fellow and Sloan Fellow. He was president of the Institute of Mathematical Statistics. He received the Guy Medal in Bronze 1995 and again in Silver 2010 from the Royal Statistical Society. He is a member of the American Academy of Arts and Sciences and the National Academy of Sciences.

Professor Johnstone will be in the department from April 23-27.