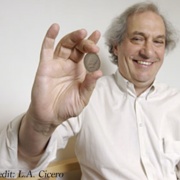 From http://en.wikipedia.org/wiki/Persi_Diaconis: “Diaconis left home at 14 to travel with sleight-of-hand legend Dai Vernon, and dropped out of high school, promising himself that he would return one day so that he could learn all of the math necessary to read William Feller’s famous two-volume treatise on probability theory, An Introduction to Probability Theory and Its Applications. He returned to school (City College of New York for his undergraduate work graduating in 1971 and then a Ph.D. in Mathematical Statistics from Harvard University in 1974), learned to read Feller, and became a mathematical probabilist”.

Professor Diaconis has contributed much to probability, statistics and mathematics. He has received numerous honorary degrees and awards including a MacArthur Fellowship, 1982 – 1987, and election to the National Academy of Sciences, 1995. http://www-stat.stanford.edu/~cgates/PERSI