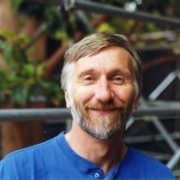 From https://en.wikipedia.org/wiki/David_Aldous:
David John Aldous, FRS (born 13 July 1952) is a mathematician known for his research on probability theory and its applications, in particular in topics such as exchangeability, weak convergence, Markov chain mixing times, the continuum random tree and stochastic coalescence. He entered St. John's College, Cambridge, in 1970 and received his Ph.D. at the University of Cambridge in 1977 under his advisor, D. J. H. Garling. Since 1979 Aldous has been on the faculty at University of California, Berkeley.