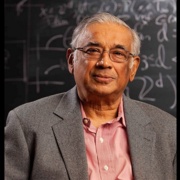 Dr. Varadhan was born January 2, 1940 in Madras (Chennai). He received his undergraduate B.Sc. (Hons.) degree in 1959 from Presidency College, Madras and Ph.D. from the Indian Statistical Institute in 1963. Since 1963, he has been at the Courant Institute of Mathematical Sciences. Varadhan is among the world’s most gifted probabilists. His ground-breaking work on large deviations provides a unified framework to study the occurrences of rare outcomes in complex systems.
His probabilistic/statistical insights have been applied in diverse fields, such as quantum field theory, population dynamics, finance, econometrics and traffic engineering. Varadhan is member of several National Academies of Sciences and Arts, including the U.S., India and Norway. He was elected to Fellowships of the American Academy of Arts and Sciences, the Third World Academy of Sciences, the IMS, the Royal Society, the SIAM and the AMS. He has been the recipient of some of the most prestigious awards, including the National Medal of Science (2010), the Padma Bhushan (2008) from the Government of India, the Abel Prize (2007) from the Norwegian Academy of Sciences, the Leroy P. Steele Prize (1996), the Birkhoff Prize (1994), and honrary degrees from Universit´e Pierre et Marie Curie (2003) and from the Indian Statistical Institute (2004).